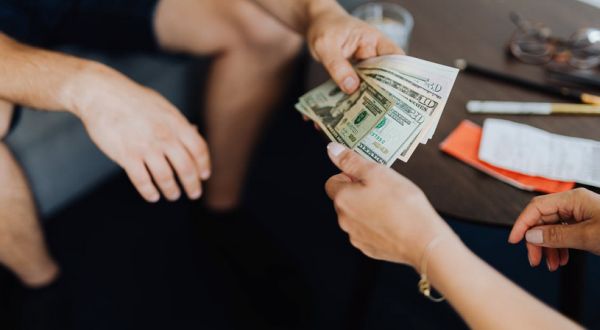 Under President Trump, lots of American taxes were being spent at southern border. There was the wall project, which was shown to slow the rate of illegal immigration. Then there were the agents and officers assigned to keep Americans secure.

Joe Biden canceled the wall work and with COVID-19 shot mandates appears to be trying to cut back on agents, too. But American tax money still is being spent at the border under his administration, with a new report published in the Federalist exposing that it is being handed out to those who are breaking and entering, so to speak.

On debit cards, sometimes even in cash.

The report is from Todd Bensman, a Texas-based senior national security fellow for the Center for Immigration Studies and a writing fellow for the Middle East Forum.

He visited the border, observed, made notes and took photographs.

He is now reporting that it is the United Nations, to which the United States pays megabucks on a regular basis, that is spending American money “in contravention of American immigration law and national interest.”

“All of this sounds like they’re using U.S. tax dollars to encourage this invasion into the nation, and it seems strange to me that we would support an organization that encourages and funds this,” Rep. Lance Gooden, R-Texas, told him. “It’s totally crazy. I am baffled that there’s not more outrage but I think the lack of outrage is due to the lack of knowledge.”

He was one of a dozen House Republicans who sponsored the “No Tax Dollars for the United Nations Immigration Invasion Act” when word of the handouts surfaced. It would prohibit the $3.8 billion in contributions currently proposed in the White House 2022 budget to the International Organization for Migration and other U.N.-supported organizations from being handed out at the border.

“It’s unclear just how much the United States gives IOM to sustain intending border crossers until they succeed, or how many got some during 2021. But the cash giveaways have been on a steep skyward trajectory since 2019 and only show signs of continuing upward,” Bensman’s report said.

“The public reporting as to how much the United States, through the State Department, gives IOM and how many got it is opaque at best. President Joe Biden’s 2022 budget calls for $10 billion in humanitarian assistance ‘to support vulnerable people abroad.’ But there’s no detailed breakout,” he wrote.

But he confirmed, “State Department-funneled money helped IOM provide 29,000 people in the Western Hemisphere with cash and voucher assistance and supported 75 shelter waystations, the State Department report states on page 42, much like the one I visited in Reynosa. Along the northern border of Mexico in July 2019, at the height of a ‘caravan’ crisis, the IOM provided 600 beds and essential items to the Mexican government and helped it expand existing shelters and build new ones to accommodate the ‘asylum seekers.'”

He said the IOM expanded after President Biden took office and ended Trump’s “Remain in Mexico” policy, a policy which courts have now ordered to be restored.

“Ambiguously, the IOM’s annual 2020 report on the program showed only that it gave cash to somewhere between 10,000 and 100,000 people in Mexico that year. Whatever the recipient numbers since 2019, the IOM clearly intends an upward trajectory for the cash giveaways. The IOM’s Emergency Manual stated several times it would do so in alignment with a fairly recent pact among an international consortium of organizations known as The Grand Bargain, of which the IOM is a signatory.”

Bensman noted many parents are given about $800 a month while they are awaiting what they consider the best time to enter the U.S. illegally.

He said the handouts are through money cards as well as “hard cash in envelopes.” But the IOM manual also notes there are bank transfers, mobile transfers and e-vouchers. Many are described as “unconditional; unrestricted cash transfers” for “multi-purpose” use.

He explained, “To border hawks, all of this looks, feels, and acts like an agency providing the means for illegal border crossings. The IOM’s own stated purpose for cash-based interventions would only reinforce the perception: the money is intended to ‘restore feelings of choice and empowerment for beneficiaries.’ Migrant advocates defend cash support to aspiring illegal border crossers as a means to prevent death and suffering among populations they believe have no choice but to migrate and would whether or not any U.N. agency helps out. But the legitimate flip side of that claim is that cash in envelopes or in e-wallets—filled in part by U.S. taxpayer money—can also be said to enable, sustain, or even entice many driven not by urgent dangers but by a desire for better jobs amid reports that Americans would let them in.”

He noted the money is thought to create “financial breathing room they need to prepare for more opportune crossing moments. The money enables that highly desired payoff, rather than a forced trip home for lack of funds after, say, an expensive smuggling journey that ended with U.S. expulsion. Those ones arrive in villages with a deterring don’t-try-this message to friends and neighbors.”

He explained the problem is that “with the greater choice and empowerment that IOM money can buy, aspiring migrants are able to remain within striking distance of the southern border to choose the time of their inevitable illegal border crossings.”