The Light of Christmas in a dark 2020

The Christmas spirit is shining a bright light on this dark year of 2020. It’s the perfect planetary alignment for this Christmas. Stargazers have been waiting for months for this stellar sign. Science news has been reporting it for weeks: On Monday evening of Christmas week, the “‘Christmas Star’ will be closest visible conjunction of Jupiter and Saturn in 800 years.”

Just after sunset on the evening of the winter solstice, Dec. 21, Jupiter and Saturn will align and remain closer to the horizon in the western sky and will look like one large star.

NASA’s Night Sky Network explained the phenomenon: “Keep in mind that while the two gas giants may appear close, in reality they are hundreds of millions of miles apart. This will still be quite a striking sight, but you will need to look fast as both planets will set shortly after sunset.” (NASA is offering tips for watching this once-in-a-lifetime conjunction on this YouTube video.)

Many see this interplanetary alignment as a celestial sign of hope in what has been the darkest year in decades. Others see it reflecting the original Christmas star that guided the wise men who traveled from the east to see the infant Jesus, born to be the Savior of the world.

Pat Hartigan, an astrophysicist at Rice University, explained on his research website:

“Most biblical scholars place the birth of Jesus somewhere between 4 BCE and 6 BCE. … [The planetary conjunction of Jupiter and Saturn appeared three times] in 7 BCE, meaning three of them occur within a few months of one another (May 29 southeast at dawn; Oct 1 up all night, mainly south; and Dec 5 in the south and southwest in the early evening for this case; exact dates depend slightly on ephemeris). Triplets are rather rare, but occur in a little over 10% of the conjunctions.”

“Another possibility I’ve seen put forth is a lovely alignment of Jupiter and Venus on June 17, 2 BCE. This was a particularly close conjunction and would have been easily visible in the western skies after dusk. The planets would have merged into a single object with the unaided eye. Venus, as it usually is, would have been brilliant. … An observer in Europe/Palestine would have seen Venus, with a fainter Jupiter a little over the diameter of the full moon away on one night, just Venus the next night, and Jupiter again close to Venus the following night but on the other side. …”

The truth is that it would have taken the wise men months and maybe even much longer to travel from the east to Jerusalem and Bethlehem to find Jesus. And with his possible age between infancy and toddler at the time of their arrival, the above planetary conjunctions could have served at various points of their long journey as celestial signs to guide them to the Savior.

Other scholars suggest the Bethlehem star was more likely a supernova or a comet. Then again, because the star appeared mobile and local in its activity until it rested over Jesus’ house, according to the Bible, some scholars feel the star was not a celestial body at all but a bright angel who guided the wise men.

Interestingly, a poll by the Pew Research Center discovered that “Most Americans believe that elements of the biblical Christmas story reflect actual historical events, although the percentage expressing this view has dropped noticeably in recent years.” The report states:

Two-thirds (66%) say Jesus was born to a virgin, compared with 73% who said this in 2014; 75% believe he was laid in a manger, down from 81%. Similarly, the shares who say they believe that wise men, guided by a star, brought Jesus gifts – and that an angel appeared to shepherds to announce the birth of Jesus – also have declined. A slim majority of U.S. adults (57%) believe that all four of these things actually happened, down from 65% three years ago. Belief in these events has declined not only among people with no religious affiliation, but <href=”https://www.pewforum.org/2017/12/12/americans-say-religious-aspects-of-christmas-are-declining-in-public-life/#religious-nones-explain-much-but-not-all-of-decline-in-belief-in-christmas-story”>among Christians as well. Overall, about one-in-five Americans (19%) now say none of these things actually happened. 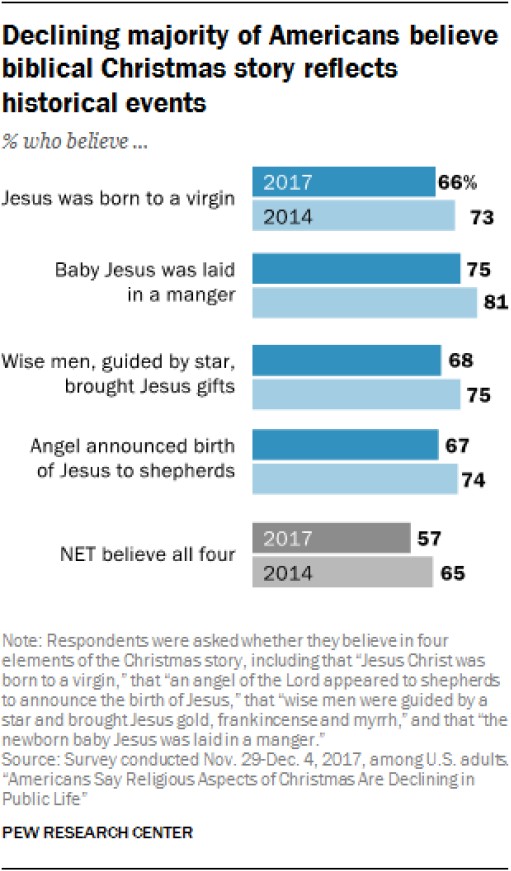 I think Americans’ skepticism today has more to do with lack of knowledge, secularism and social bias then serious study. I learned a long time ago, it is not historians who doubt the historical Jesus or events surrounding his birth and life.

Case in point, Dr. Paul Meier, who was the former Russell H. Seibert Professor of Ancient History at Western Michigan University, from which he retired in 2011, retained the title of Professor Emeritus in the Department of History. Dr. Meier is a first-rate scholar and prolific author, including his books: “The First Christmas: The True and Unfamiliar Story” (2012), “In the Fullness of Time: A Historian Looks at Christmas, Easter, and the Early Church” (1998), Jesus: Legend or Lord? (2003)” “How We Got the Bible” (2009), and “The Real Jesus of Nazareth: New Evidence from History and Archaeology about Jesus and the Early Christians” (2016).

Dr. Meier summarized in “Jesus: Legend or Lord?”: “Jesus was a historical figure. The temporal, geographical, historical and archaeological findings all underscore that fact. We have a reliable record of His birth, ministry, suffering and death.”

With due respect to every other religion and those who adhere to them, Dr. Edwin Yamauchi, who is Professor Emeritus of History at Miami University, where he taught 36 years from 1969 until 2005 and is also a prolific scholarly author, wrote that Jesus was unique and unlike any other religious leader before or after him: “To argue each of these [world religious] leaders is equivalent is to argue not from tolerance, but from ignorance. … In comparing Jesus with Zoroaster, Buddha, Socrates and Muhammad, we discover a number of unique features in Jesus’ life and ministry: (1) Only Jesus came out of a culture that was already monotheistic; (2) His death by crucifixion; (3) Excluding later legend in other religious leaders, early accounts attribute miracles only to Jesus; (4) Only Jesus spoke on his own unquestioned authority; (5) Only Jesus predicted he would be resurrected after his death, and only his followers rest their faith on such an event; (6) Only Jesus claimed equality with a sole, supreme deity.”

All of this to say that the message and Messiah we celebrate at Christmas time is true, despite what Americans or those around the world poll about it. And it is a message of hope and light that we need now more than ever before in our country and world, especially in this dark season of a pandemic and an unprecedented year of hardship and loss like 2020. We need more than Santa. We need a Savior.

Eight hundred years before Jesus was born, the Prophet Isaiah predicted about the time the Messiah would come: “The people walking in darkness have seen a great light; on those living in the land of deep darkness a light has dawned.”

We need that “great light” as much as ancient people did when Jesus was born. The “Christmas star” couldn’t have appeared at a better time than during this sacred Christmas week. His light still shines. Jesus said, “I am the Light of the World. Whoever follows me will never walk in darkness, but will have the light of life.”

Two thousand years ago, the angel of the Lord proclaimed to the shepherds in the Israeli fields, “Today in the town of David a Savior has been born to you; he is the Messiah, the Lord.”

And the angel of the Lord explained to Joseph about Mary, “She will give birth to a son, and you are to give him the name Jesus, because He will save His people from their sins.”

My wife, Gena, and I celebrate His light, life and mission in our world, and we pray you do too, especially if you are enduring or have endured a dark 2020. If you’ve never made peace with God, then I encourage you to do so by watching this 2-minute video, “Steps to Peace with God” by the late great Rev. Billy Graham, through whom my mom, myself and my brothers believed.

(For those looking for a deeper spiritual reflection or a great gift to give now or in the new year, I highly recommend the latest book from another prolific author and our personal friend, Randy Alcorn, “Face to Face with Jesus: Seeing Him as He Really Is.” Please listen to Randy talk about his latest book and read an excerpt here. It’s available as an ebook as well. And if some still doubt the authenticity of the Bible, God’s existence or the person and mission of Jesus, I recommend you read this Free ebook our pastor is giving out this Christmas: “The God Questions: Exploring Life’s Greatest Questions about God.” Another great little book is “The Case for Christmas: A Journalist Investigates the Identity of the Child in the Manger,” by former atheist and Chicago Tribune legal editor, Lee Strobel.)

America, don’t you give up! Don’t you allow 2020 darkness to seep any further into your faith, family or freedom! Keep fighting! Keep moving forward! And don’t you let anyone or anything rob you from enjoying your Christmas, for the Light of the World has come into our darkness with the greatest gift of all!

From my household to yours, Gena and I wish you the safest and Merriest of Christmases!