Will America split in half?

One hot topic we’re hearing lately is the possibility of conservative states seceding from America. This sounds so familiar, doesn’t it? Secession was also a hot topic leading up to the Civil War.

Some big names are engaging in this debate. Texas Republican Party Chairman Allen West, after the Supreme Court dismissed a Texas lawsuit against election battleground states, stated, “Perhaps law-abiding states should bond together and form a Union of states that will abide by the Constitution,” as a remedy to a broken republic where the justice system has been ravaged.

Also, talk-radio host Rush Limbaugh believes conservative states are “trending toward secession,” though he admitted it’s a concept he’s not ready to accept. “A lot of bloggers have written extensively about how distant and separated and how much more separated our culture is becoming politically and that it can’t go on this way,” he said. “There cannot be a peaceful coexistence of two completely different theories of life, theories of government, theories of how we manage our affairs. We can’t be in this dire a conflict without something giving somewhere along the way.” He added, “I still haven’t given up the idea that we are the majority and that all we have to do is find a way to unite and win.”

The frustrating thing is how many people – left and right – love their country and don’t want to “dissolve the political bands which have connected them with another.” They want America to return to what it was, without Big Tech censorship, tyrannical dictators hiding behind masks, or schools that indoctrinate rather than educate. That’s why so many people, liberal and conservative, voted for Trump in staggering numbers – so staggering that massive voter fraud was necessary to pry him out of office. It’s why the progressives in power stopped the vote count in the middle of the night in critical states and, literally and metaphorically, stuffed the ballot boxes for Biden.

It’s the extreme leftists who are now driving the political machine. “As we know, the truly rabid left exist in extremely small numbers,” write columnist Erik Rush. “It is only their immoderate vociferousness and the fact that many of these people occupy places of power that give the impression of a wider scope of influence.” [Emphasis added.]

This talk of secession is born of sheer frustration and a recognition that the vast majority of Americans want to return this nation to its constitutional roots. It’s born of the sheer frustration that those in power refuse to adhere to the will of the people and put back in office the one man who has the power to hold back the tide of socialism. It’s the sheer frustration that come from pounding our heads against the implacable brick wall of Big Tech, the mainstream media and the public educational system that have collectively become the enemies of America and are complicit in bringing this nation to its knees.

So yes, I understand the desire for secession.

Even progressives are entertaining the idea, however sarcastically. In a now-deleted tweet, lesbian feminist activist Amy Siskind proposed a satirical division of America in which the blue states joined Canada to become “The United States of Canada,” while red states form an independent country, “Jesusland.” (To be honest, this proposed division holds a lot of appeal for me.) 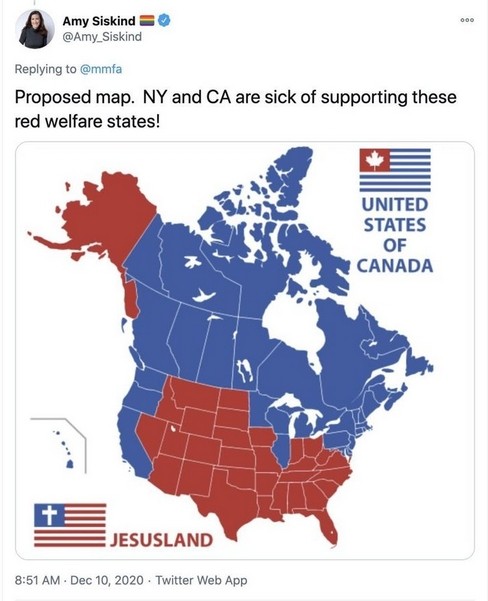 If Biden takes office on Jan. 20, what then? “American politics will be even more poisoned and polarized than it has been for the last four years,” notes Pat Buchanan. “Tens of millions of Americans will see themselves as disfranchised and believe that the greatest champion they have had in decades was illegally driven from power by the same deep state-media conspiracy he fought for four years.”

When a couple gets a divorce, they often cite irreconcilable differences. That seems to be the case right now in America. Let’s face it, progressives loathe conservatives and conservatives loathe progressives. A house divided against itself cannot stand. This mutual hatred is growing and makes it impossible for people to live peaceful, productive lives. Why stay in a marriage if you hate your spouse? Why remain with an abusive partner? Why not go your separate ways? These are questions worth asking.

“Though secession is unlikely, a secession of the heart has already taken place in America,” notes Buchanan. “We are two nations, two peoples seemingly separated indefinitely. Can a nation so divided as ours, racially, ideologically, religiously, still do great things together, as did the America of days gone by, to the amazement of the world?”

My husband and I recently had a discussion about the logistics of secession. Who goes where? Who gives up their homes, their businesses, their community connections and moves to either the red or the blue states that want them? Among our largely conservative neighborhood, we have one progressive family who’s lived in the area for decades. What would happen to them? We have family and friends living in vivid-blue states. Would they be persecuted if they remained behind?

In short, secession couldn’t happen without a tremendous amount of pain and unfairness. Consider what happened when India was partitioned in 1947 into two nations (India and Pakistan). According to Wikipedia: “The partition displaced between 10 and 12 million people along religious lines, creating overwhelming refugee crises in the newly constituted dominions. There was large-scale violence, with estimates of loss of life accompanying or preceding the partition disputed and varying between several hundred thousand and 2 million. The violent nature of the partition created an atmosphere of hostility and suspicion between India and Pakistan that affects their relationship to this day.”

Is this what the future of America might hold? I pray not. While I don’t agree with our progressive neighbors’ politics, I most certainly don’t want them to become political refugees. I have no desire for them to leave their home of 20 years for bluer pastures.