A CBS poll finding 85% of Americans liked President Joe Biden’s address Congress turns out to have queried only a small sampling of Republicans.

The polling company, YouGov, surveyed only 169 Republicans among 943 people, or just 18% of the total sample.

Meanwhile, CBS News declared on its website, “Most viewers who tuned in to watch President Biden’s speech liked what they heard and came away feeling optimistic about America.”

But the poll surveyed 510 Democrats and another 235 “independents,” which have tended to skew to the left in previous polls, the National Pulse reported.

The full cross-tabs have not been published, National Pulse noted, but it’s likely that the Democrats and independents amount to some 93% of the 85% approval rate.

If, for example, the survey was 54% Republicans and 18% Democrat, it would have indicated a majority of Americans did not like Biden’s speech.

On its website, CBS News said viewers of the Biden speech described the president as “Presidential, “Caring,” “Inspiring” and “Bold.”

Those words presumably were fed to the respondents, as each term drew the affirmation of at least 80%. And 89% thought “Presidential” and “Caring” were appropriate descriptions of the address. 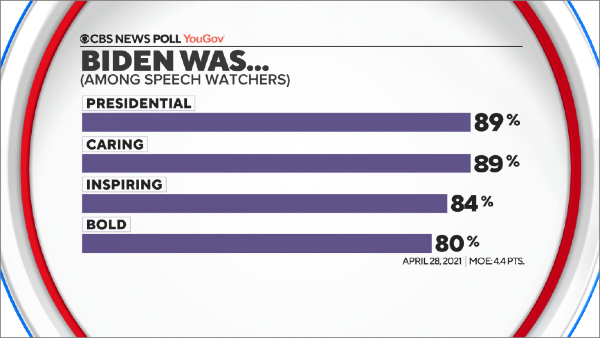 Rep. Eric Swalwell, who briefly ran for the Democratic Party nomination and was among the more outspoken critics of President Trump, cited the CBS poll as evidence his Republican colleagues are “woefully out of touch” with Americans.

85% of Americans who watched @JoeBiden‘s address to a joint session of Congress approved of his speech; 78% said it made them feel optimistic about America.

Memo to @HouseGOP & @SenateGOP: You’re woefully out of touch with those you’re supposed to serve. https://t.co/cOyndHtRam

Meanwhile, it was Sen. Tim Scott, R-S.C. — in the official Republican response to Biden’s address — who offered a more optimistic view of America.

The United States, he said, is a nation of redemption and not fundamentally racist.

“Hear me clearly: America is not a racist country,” Scott said. “It’s backwards to fight discrimination with different types of discrimination, and it’s wrong to try to use our painful past to dishonestly shut down debates in the present.”

Many on the left reacted on Twitter to Scott’s speech with an “Uncle Tim” theme, referencing the subservient slave “Uncle Tom” in the iconic novel by abolitionist Harriet Beecher Stowe.

Twitter did not block the “Uncle Tim” topic until Thursday morning, after it had trended for some 12 hours, Fox News reported.