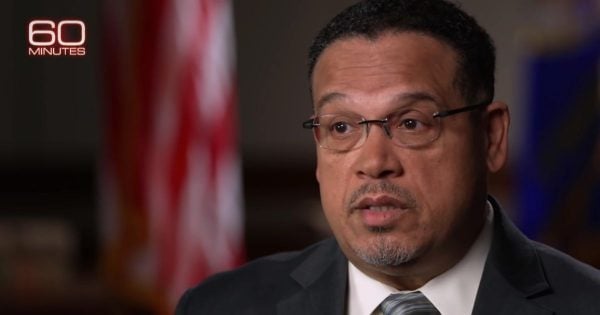 The tragic death of George Floyd in police custody in Minneapolis is now the leading symbol of the claim that “systemic racism” permeates American law enforcement.

But the chief prosecutor in the trial of officer Derek Chauvin says there’s no evidence that race played a role in the 46-year-old black man’s demise.

Minnesota Attorney General Keith Ellison was asked in an interview Sunday night on CBS’ “60 Minutes” if the death of Floyd amounted to a hate crime.

“I wouldn’t call it that, because hate crimes are crimes where there’s an explicit motive and of bias,” said Ellison, a former Democratic congressman.

“We don’t have any evidence that Derek Chauvin factored in George Floyd’s race as he did what he did.”

Ellison explained to CBS host Scott Pelley that hate crimes charges under Minnesota law are brought only it there’s “evidence that we could put in front of a jury to prove.”

“If we’d had a witness that told us that Derek Chauvin made a racial reference, we might have charged him with a hate crime. But I would have needed a witness to say that on the stand. We didn’t have it. So we didn’t do it,” he said.

Pelley followed up: “The whole world sees this as a white officer killing a black man because he is black. And you’re telling me that there’s no evidence to support that?”

Ellison insisted it was not necessary to prove Chauvin is a racist to demonstrate that “there is a social norm” in the United States that “killing certain kinds of people is more tolerable than other kinds of people.”

“In order for us to stop and pay serious attention to this case and be outraged by it, it’s not necessary that Derek Chauvin had a specific racial intent to harm George Floyd,” Ellison insisted.

“The fact is we know that, through housing patterns, through employment, through wealth, through a whole range of other things — so often, people of color, black people, end up with harsh treatment from law enforcement. And other folks doing the exact same thing just don’t.”

Ellison, referencing a Minneapolis suburb, said that if an “officer doesn’t throw a white neurologist in Eden Prairie, Minnesota, to the ground and doesn’t sit on top of his neck, is he doing it because this is a fellow White brother? No.

“He’s doing it because he thinks, ‘This is an important person and if I treat them badly somebody’s going to ask me about this. This person probably has lawyers. He probably knows the governor. He probably knows — he has connections. I can look at the way he’s dressed and the way he talks, that he’s probably, quote, unquote, ‘somebody.’ And so that’s really what it’s about.”

Many studies have found, however, that white police officers are much less likely to shoot or use force against unarmed black suspects than unarmed white suspects, as the Washington Post reported.

Chauvin was convicted last Tuesday on two counts of murder and one count of manslaughter in Floyd‘s death. Hennepin County Judge Peter Cahill will announced the sentence June 16. The counts carry a maximum of 40 years in prison.

‘The knee on the neck of justice’

As WND reported last week, while the death of George Floyd has become the impetus for all kinds of measures to address “systemic racism” in America, prosecutors never accused Chauvin of racial animus.

President Joe Biden, on the other hand, called Floyd’s death “a murder in the full light of day, and it ripped the blinders off for the whole world to see the systemic racism … that is a stain our nation’s soul” and “the knee on the neck of justice for black Americans.”

Biden is urging the Senate to pass the George Floyd Justice in Policing Act, saying last Tuesday after the verdict that he wants to “sign it into law as quickly as possible.” The law would eliminate qualified immunity for police officers; ban chokeholds and no-knock warrants; end “racial and religious profiling”; and establish a national database of police misconduct.

Rep. Byron Donalds, R-Fla., said last Wednesday in a Fox News interview it was “disgusting” that Democrats “were poised to use the verdict to springboard to the thing they really want, which is passing their agenda.”

On Wednesday, the Biden Justice Department announced it has opened a civil investigation of “systemic” issues in the Minneapolis Police Department.