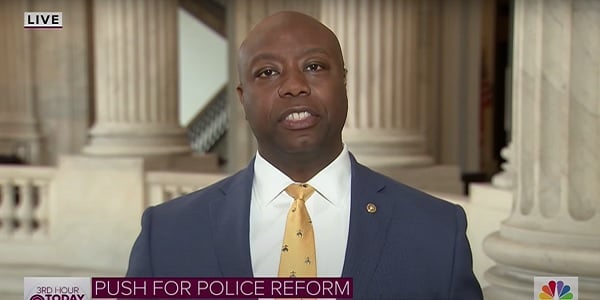 The slur, a play on the “Uncle Tom” epithet that has been used derogatorily against blacks who are accused of being too deferential to whites, surged – was on Twitter as “trending” after Scott’s speech.

Fox News reported leftists and progressives were “infuriated” by Scott’s comments that the United States is not a racist country so their social media comments “relayed the insulting, racially charged play on his name.”

It wasn’t until some 12 hours later, on Thursday, that Twitter finally acted to block the racial comments, which on their face appear to violate the company’s ban on insulting comments based on race.

A Twitter official told Fox that the company was “blocking the phrase … from appearing in Trends.”

The official said that was “in line” with company policies, which are intended to “promote health conversations.”

The company declined, however, to explain why it took so long.

Fox reported, “Scott’s speech was well-received on the right, with some commentators saying he had improved his political standing in a notoriously difficult speech to give.”

He had stated, after Biden’s speech called for trillions of dollars in unfunded spending, “Hear me clearly: America is not a racist country. … It’s backwards to fight discrimination with different types of discrimination, and it’s wrong to try to use our painful past to dishonestly shut down debates in the present.”

He also confirmed he had experienced racism, such as getting targeted by police seven times in a year.

Fox reported he “called out Democrats for using the filibuster last year to block his police reform bill and then this year, when they are in power, claiming the filibuster needs to be abolished because it’s a Jim Crow relic.”

“Race is not a political weapon to settle every issue the way one side wants,” he said.

Among the insults that appeared:

Tim Scott gets called Uncle Tom by progressives. But he’s an Uncle Tim.

😩🤣🤣🤣 Twitter got me rolling with these Uncle Tim tweets.
I hope y’all roast Tim Scott’s a** all week. pic.twitter.com/jepZWTjGsB

They prompted Mollie Hemingway of The Federalist to note: “Twitter is choosing to trend a racist attack from the left on Sen. Tim Scott. Apparently they want him to suffer for the crime of upstaging Biden via a highly effective speech.”

Fox reported, “Black conservatives have often been on the receiving end of the insult, such as Supreme Court Justice Clarence Thomas, who was repeatedly referred to as ‘Uncle Clarence’ by far-left MSNBC anchor Joy Reid last year.”

The Daily Wire, in fact, described Scott as “shredding” Biden.

“Scott hammered Biden for dividing instead of uniting, and on numerous policy issues, including infrastructure, Biden’s ‘Family Plan,’ and other extreme proposals.”