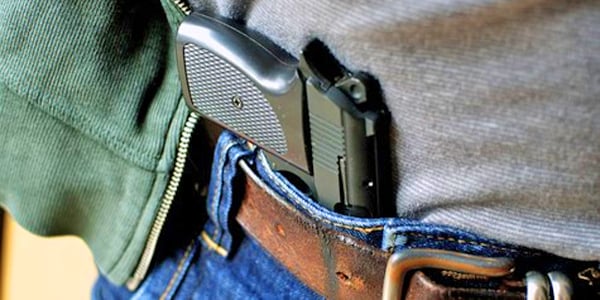 A New York state law that makes it nearly impossible to obtain a concealed handgun carry permit in the state, leaving people without a self-defense option at times, is going to be reviewed by the Supreme Court.

Fox News reported the case, by the New York State Rifle & Pistol Association, charges that the state law is not allowed because it makes obtaining those permits so difficult.

“The petition for a writ of certiorari is granted limited to the following question: Whether the State’s denial of petitioners’ applications for concealed-carry licenses for self-defense violated the Second Amendment,” the court said.

For one thing, the state requires applicants to prove “proper cause exists” for the permit to be obtained. The 2nd U.S. Circuit Court of Appeals ruled in August that the law is constitutional.

Fox reported New York is one of eight states with limits on who has the right to carry a weapon in public. The others are: California, Delaware, Hawaii, Maryland, Massachusetts, New Jersey and Rhode Island.

The Second Amendment Foundation’s Alan M. Gottlieb explained, “The Second Amendment protects an individual right to not only keep arms, but to bear them. SAF has several right-to-carry cases filed which include challenges to restrictive laws in New Jersey, Maryland and New York City. A favorable ruling in this case will almost certainly impact those and other cases.”

He added, “The entire gun rights community has waited for many years for this news. A right that exists only in one’s home is not a right at all. We do not limit the right of free speech, or freedom of the press, or the practice of one’s religion, or the right to legal counsel just to someone’s residence. And ultimately, that’s what we’re talking about, constitutionally-protected fundamental rights.”

“This case was made possible by the Second Amendment Foundation’s Supreme Court victory in McDonald v. City of Chicago that incorporated the Second Amendment to the states via the 14th Amendment,” Gottlieb said. “SAF’s victory in that case built the foundation for this and other lawsuits against states and localities to be heard by the Supreme Court to protect and expand gun rights, and we are proud of that.”

Fox reported, “Paul Clement, representing challengers to New York’s permit law, said the court should use the case to settle the issue once and for all. ‘Thus, the nation is split, with the Second Amendment alive and well in the vast middle of the nation, and those same rights disregarded near the coasts.'”

A spokesman for the National Rifle Association’s Institute for Legislative Action said, “The court rarely takes Second Amendment cases. Now it’s decided to hear one of the most critical Second Amendment issues. We’re confident that the court will tell New York and the other states that our Second Amendment right to defend ourselves is fundamental, and doesn’t vanish when we leave our homes.”

The Washington Examiner reported the case was accepted in an unsigned order.

The law requires applicants not only to show “proper cause” but also a “special need for self-protection distinguishable from that of the general community or of persons engaged in the same profession.”

At a blog that focuses on the Supreme Court, Amy Howe noted the acceptance “sets the stage for a major ruling on gun rights in the court’s 2021-22 term.”

“Two men challenged the law after New York rejected their concealed-carry applications, and they are backed by a gun-rights advocacy group,” she explained.

Just last year the court had been set to consider a case challenging New York City’s ban on the transport of licensed handguns outside the city, but it dropped the plan when the city changed its rules.

At the time, several justices said the high court should do something to enforce its previous gun rights decisions, District of Columbia vs. Heller and McDonald vs. City of Chicago.